The End of Veganuary? 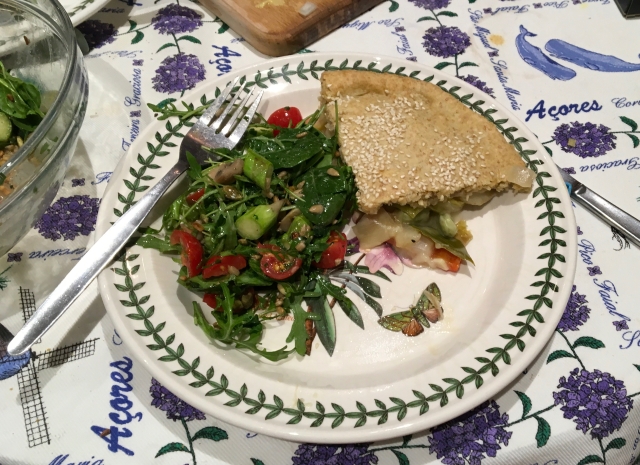 I always thought of myself as an obligate carnivore until my daughters became vegan and vegetarian over the past year or two. Initially I would only make vegetarian food when they were home but gradually experimenting with tofu and lentils became a daily occurrence.

I had some success with Vegan Meringue – how on earth did aquafaba come about? – Vegan Cheese Sauce , and Vegan Syrup Sponge Pudding. Disasters with Vegan Yorkshire Puddings , Vegan Sponge Cakes and Tofurkey.

It hasn’t been that hard though. I might just keep on with it.

Put flour and fat in a food processor ( 2:1 weight ratio, vary amounts to suit size of  your pie dish , 180g flour to 90 g fat makes a decent sized lid) blitz to breadcrumbs and add a little cold water to make into a pastry. Put pastry in fridge while you make the filling.

Melt 1 tbsp vitalite ( or similar) in microwaveable jug. Stir in 1 tablespoon of cornflour and microwave for another 15-30 seconds until it thickens. Stir in some plant milk avoiding lumps and remicrowave until you have a creamy sauce. ( almond milk works well) You can flavour the white sauce by adding Dijon mustard / bay leaf/ parsley/ grated violife at this stage

Saute a few veg in some olive oil. I used Leek, onion, red pepper celery and added some boiled potatoes and frozen peas at the end.

Now combine the white sauce , veg, salt and pepper in the pie dish before rolling out the pastry to add as a lid. You can brush almond milk over the pastry and sprinkle with sesame seeds to give a nice finish but not necessary. I usually put a slit in middle of lid to let steam out.

As veg and sauce all cooked already you just have to put it in the oven until the pastry is brown and crispy.  I cook nearly everything on 180 C , it took about 30 minutes.

One thought on “The End of Veganuary?”